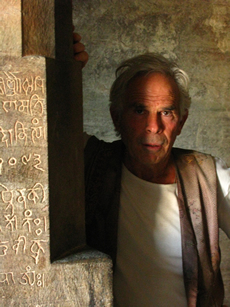 Moish Sokal was born during the Israeli War of Independence to artistic parents who encouraged his talents. He grew up in a beachside town of the port city of Haifa.

At 20 he left his family to settle in Sydney, Australia when he married his first wife.

He studied Graphic Art and Design at Sydney Technical College and worked as a Graphic Designer and Illustrator for the next 22 years. However, he frequently left the commercial world to travel and paint, mainly in Third-world countries, but also visiting Israel and England with his Somerset-born second wife.

The Sokals came to live in England in 1990. Since then Sokal has had many one-man exhibitions, the last being his successful exhibition “Safari” in the Malthouse Gallery, East Lambrook Manor Gardens in 2021.